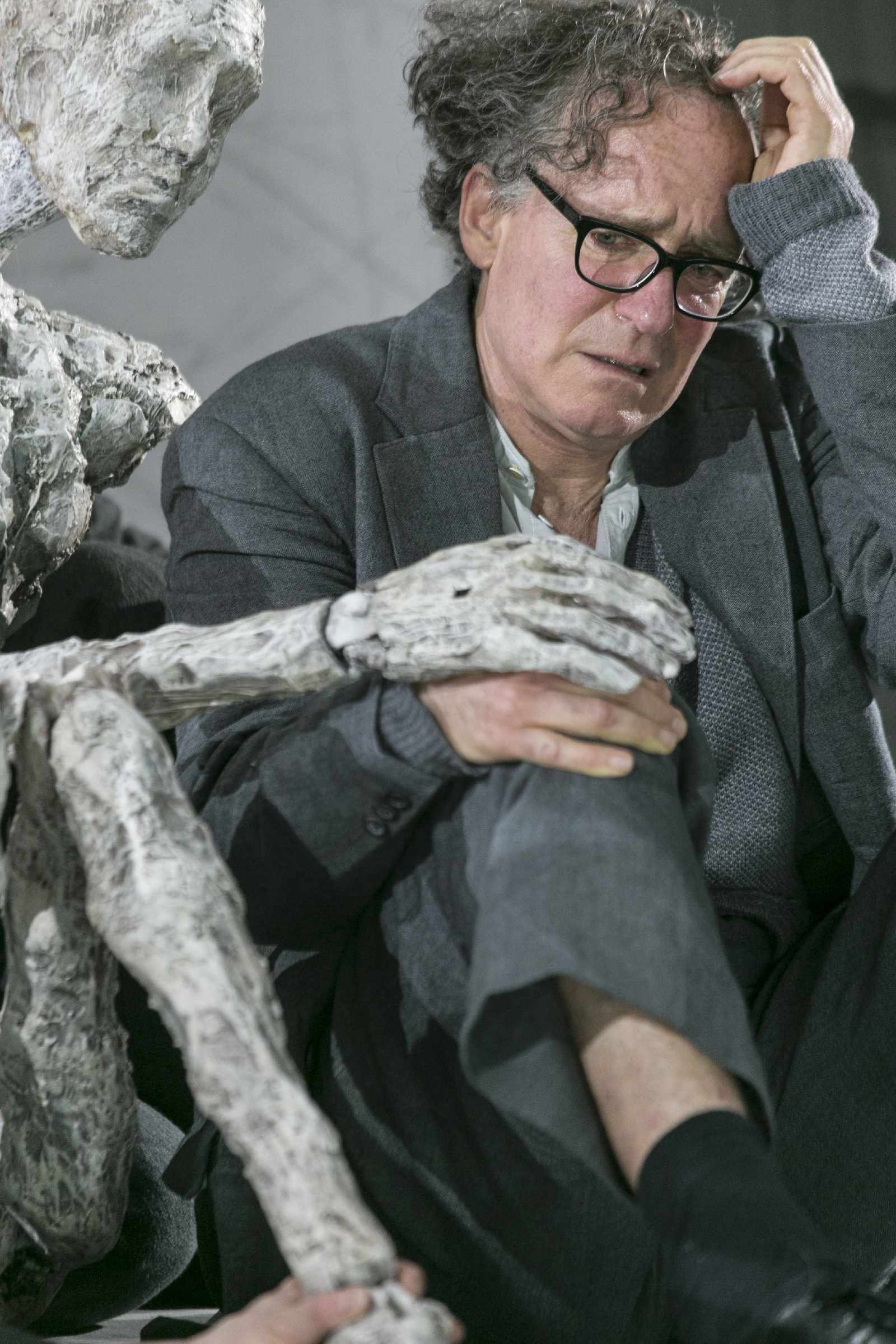 Stiller, premiered on the 8th June 2013 in Munich, is an adaptation (by Andreas Karlaganis, Tina Lanik and Mervyn Millar) of Max Frisch’s novel. It was produced by the Residenz Theatre (Bayerische Staatsschauspiel) in association with Handspring Puppet Company, directed by Tina Lanik & Mervyn Millar and with puppets designed by Ed Dimbleby. It opened in the intimate and beautiful Cuvilliestheater and transferred in 2014 to the larger Residenztheater. It remained part of the repertoire until 2016.

The play follows the story of a prisoner who is arrested in Switzerland and accused of being the missing sculptor Anatol Stiller. Although he vigorously denies it, the evidence seems to mount up as people and memories from his past are presented to him and the audience. In counterpoint, he confesses to his prison guard a series of grisly murders that he claims to have committed in the Americas. At the centre of the play is the relationship between the prisoner and Stiller’s wife Julika, who was left dying in a sanatorium when Stiller disappeared. Is this Stiller? Can a man leave his past behind and start anew?

In our adaptation the main role is played both by an actor (August Zirner) and a puppet (manipulated by several members of the ensemble). Other puppets emerge to enact memories and fantasies from Stiller’s past lives – and are located finally in his sculpture studio.

Ed Dimbleby’s puppets were developed in a series of workshops led by Mervyn and Tina Lanik with the Residenz ensemble, They owe a debt of inspiration to Giacometti, another major Swiss artist working in the 1950s whose work speaks profoundly about identity and remaking it.

You can find the playing schedule of Stiller here.

Stiller was designed by Stefan Hageneier, with lighting by Gerrit Jurda and music by Rainer Jörissen.

The puppets were designed by Ed Dimbleby and made by Zak Bernard, Josie Corben, Monica Corder, Ed Dimbleby, Craig Guinan and Lara Scott.

“The puppets are Giacometti’s fantasies come to life; haggard figures made of plaster, grey, with joints in their arms and – should they have them – legs. The Stiller puppet is naked plaster, but full of life. A wonderful evening.. everything convinces in this production, which brings the novel vividly to life on stage. Fascinatingly enigmatic.. the puppets are no more just embellishments than the design is just furniture.” Suddeutsche Zeitung

“A clever and magical stage adaptation of Max Frisch’s novel.. hypnotically, shimmeringly light.. the actors seem to breathe real life into the puppets, to transmit the thoughts and feelings of their characters to them” Münchner Merkur

[the puppets and actors create] “a fascinating interplay of identities that gives another level to the story.. The stark figures’ long and stretched bodies are reminiscent of the sculptures of Alberto Giacometti. They seem desolate, like colourless plaster casts of the real world, or like souls. Like unreal beings made of thought and memory. Or disturbing and ghostly, like the dead. And yet, again and again, when the actors start moving their legs, arms, hands, bodies and heads, the plaster-grey beings come to life. Suddenly Stiller looks deep into the eyes of Julika. Or two beings embrace each other delicately in a dance. The effect is not of stiff puppets, it is real and touching, poetic.” Die Welt

“the puppets give off a calm, almost hypnotic mood. Above all, Stiller’s pale double, the only figure always on stage, is increasingly the still focal point of the evening.” nachtkritik.de

“..the superstar is a small puppet-dog with perfect dog behaviour” Münchner Tageszeitung