We designed and directed the puppetry for this production of Astrid Lindgren's classic story at the prestigious Schauspielhaus Zürich for the winter of 2014/15. Lindgren's adventure story of brave boys, intrigue, heroism, rescue and loyalty inhabits a fantastical world filled with animals - and one very large dragon.

The puppets for Die Brüder Löwenherz were designed by Mervyn Millar and made by a team at Schauspielhaus Zürich led by Christine Rippmann and Thomas Unseld. The Dramaturg was Andreas Karlaganis, who we previously worked with on Stiller at the Bayerische Staatschauspiel (Residenztheater Munich).

Die Brüder Löwenherz opened to ecstatic reviews on November 8th 2014 and plays in the repertoire at the Schauspielhaus' historic theatre in the centre of Zürich. 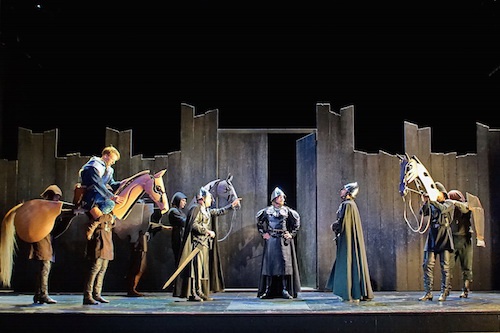 In this bare space, life-size animal figures move alongside the actors, created by the British puppet designer Mervyn Millar. The horses Fjalar and Grim are represented absolutely brilliantly: They are made of a wood head and hindquarters and a real tail, held by two men in brown hooded jackets. When Karl and Jonathan leap up on the horses for the first time, it draws spontaneous applause.
In the cruel ruler Tengil and Katla, the fire-breathing dragon, Lindgren’s novel provides enough material to really teach the theatre audience (from eight years) about fear. The Schauspielhaus production however, avoids any sensationalism. The final applause proves that the action on stage has been totally thrilling: Even before the performers bow, the audience clap and stomp in a way I’ve rarely experienced.Anne Bagattini, Neu Zürcher Zeitung

Mervyn Millar’s rod puppets are ravishing in their simplicity, composed of individual plates and manipulated by visible puppeteers. The first applause came because of the "horses", with their lively snorting and trotting puppeteers, on whom Jonathan and Karl go riding into their adventure.
Because of course it's all about how you can cope with fear and death, if you are honest and can rely on each other. In addition to the boys, speaking pigeons, courageous heroes, a cowardly traitor, stupid soldiers, a dragon and a Tyrant find their place in Astrid Lindgren’s packed adventure story.
And so the Schauspielhaus succeeds once more in proving that good children's and youth theatre effortlessly reaches all ages.

The first applause is for a horse. It is made up of two people. One takes the head piece, the other the hind. And when the brothers Lionheart want to mount up, a middle-man steps in. It’s a joy for all when Jonathan and Krümel ride through field, forest and the Wild Rose Valley like this.
The British puppet designer Mervyn Millar has designed these animal-objects and rehearsed their movements: from the horses down through the wolf and fox to the rabbits that nibble at the stage, and then up again to the dragon Katla, which stands above the whole ensemble. These animals are put together piece by piece, so that they can also explode. A great thing.

There’s a powerful and unusual silence in the auditorium during the winter children’s show on the Pfauen stage. The spontaneous applause for Mervyn Millar’s puppets, however, proves that Ingo Berk’s staging of "The Brothers Lionheart" has totally captivated it’s young audience.

We worked again with the creative team from Die Brüder Löwenherz on Peter Pan.