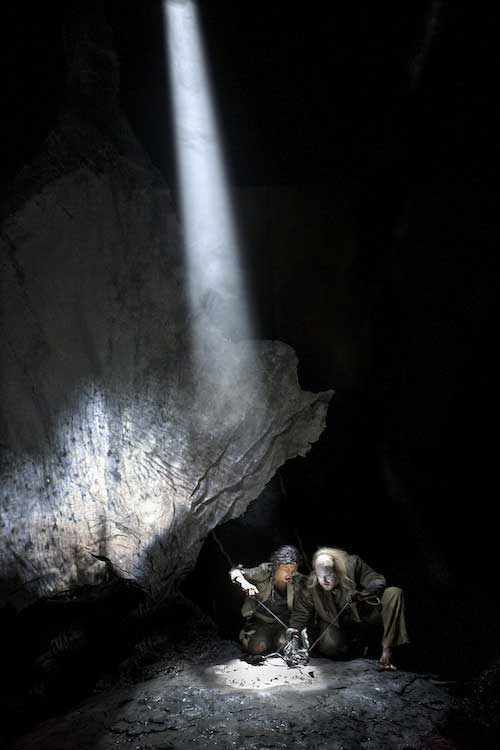 Crow was an adaptation of Ted Hughes’ extraordinary poem collection, made with choreographer Ben Duke of Lost Dog Dance. It was commissioned by the Festival 2012 (as part of the Cultural Olympiad), the Greenwich and Docklands Festival and The Royal Borough of Greenwich. It was directed by Mervyn Millar, with choreography by Ben Duke, and puppets designed by Mervyn Millar and Ed Dimbleby.

Crow was an experimental mixture of puppetry with dance, charting the disconnected fragments of experience from the epic to the intimate contained in Hughes’ poems. The texts revolve around the experiences of a character called Crow who is sometimes a real crow, sometimes nearly a man, and sometimes an essence of life in a world full of death. The whole company worked with dance, puppetry and text to make a unique spectacle.

Film-maker and animator Yoav Segal, who made the incredible organic visuals for Crow, later assdembled material from the show into a short film, using the voice of Ted Hughes reading exceprts from the poems. This intense and involving short film can be seen here: Yoav's Segal's Film of Crow on Vimeo.

The puppets were made by Billie Achilleos, Ed Dimbleby, Seonaid Goody, Jo Lakin, and Tracy Waller.

"you think you are dreaming, and in no easy sleep.. This Handspring UK show, based on Ted Hughes’s Crow poems, must be one of the oddest and most unnerving hours of the Cultural Olympiad. Moreover, it is by no means the least athletic event of the 2012 East London summer... Ornithophobics beware, but it’s a stunning piece of theatre" Libby Purves, The Times

"The first incarnation of a crow in this adaptation of Ted Hughes's important 1970 book of poetry is a gasping little wretch of a bird, born out of nightmarish nothingness, untangling itself into existence. It is superseded by another, larger version, which is promptly torn apart. More crows take form: one is disturbingly humanoid; others are actual humans sporting crow wings, a giant crow head, fragments of crow... these ragged, tricksterish specimens reflect the fragmentary nature of Hughes's book, the intentional crudity of his language, the raw, primitive life-force that the poet saw embodied in the black-eyed, flesh-eating crow. The puppetry blends freely with dance and the six performers, drawn from both disciplines, channel the violence of Hughes's poetry. A discordant electronic score by Leafcutter John adds to the sense of unease... it brings out the visceral energy of the book and a feeling of defiance in the face of death." Killian Fox, The Observer

"charm, courage and a difficult beauty that lingers in the mind" - Jane Shilling, The Telegraph

Crow in the New York Times