based on The Great Elephant Chase by Gillian Cross

a new play for families for the Burgtheater Vienna We're excited to be creating a new piece for the prestigious Burgtheater in Vienna this autumn. Wie Versteckt Man Einen Elefanten? (How to Hide an Elephant) is a new adaptation of Gillian Cross' much-loved adventure story about two children attempting to escape across 1880s America.. with a large Indian elephant.

Wie Versteckt Man.. opened on 27th October at the splendid Kasino am Schwarzenbergplatz, Vienna.
The show is adapted by Joel Horwood and directed by Ingo Berk (director of Die Brüder Löwenherz and Peter Pan) and Mervyn Millar. The designer is Damian Hitz, music is by Patrik Zeller and the dramaturg is Tobias Herzberg. 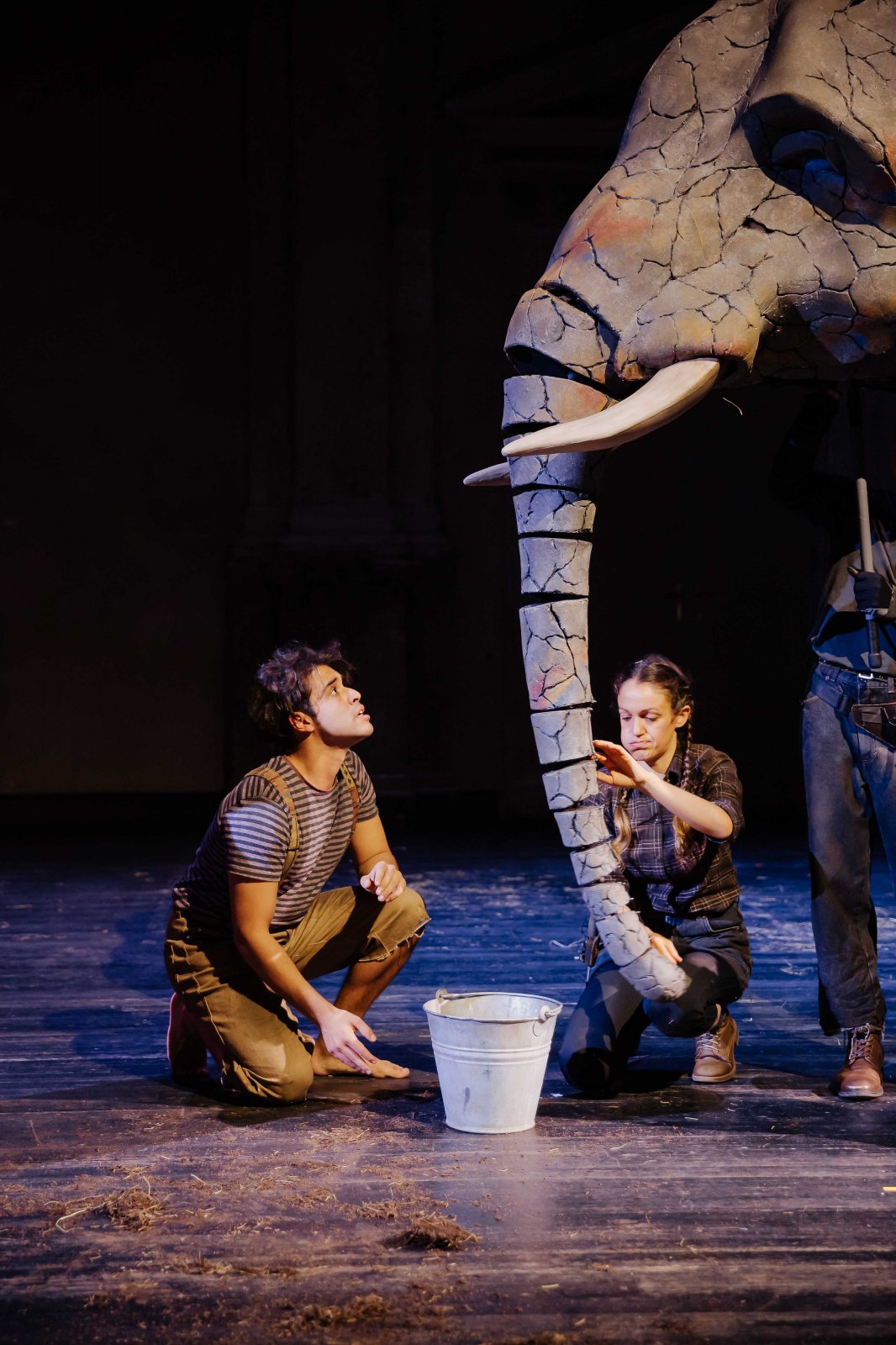 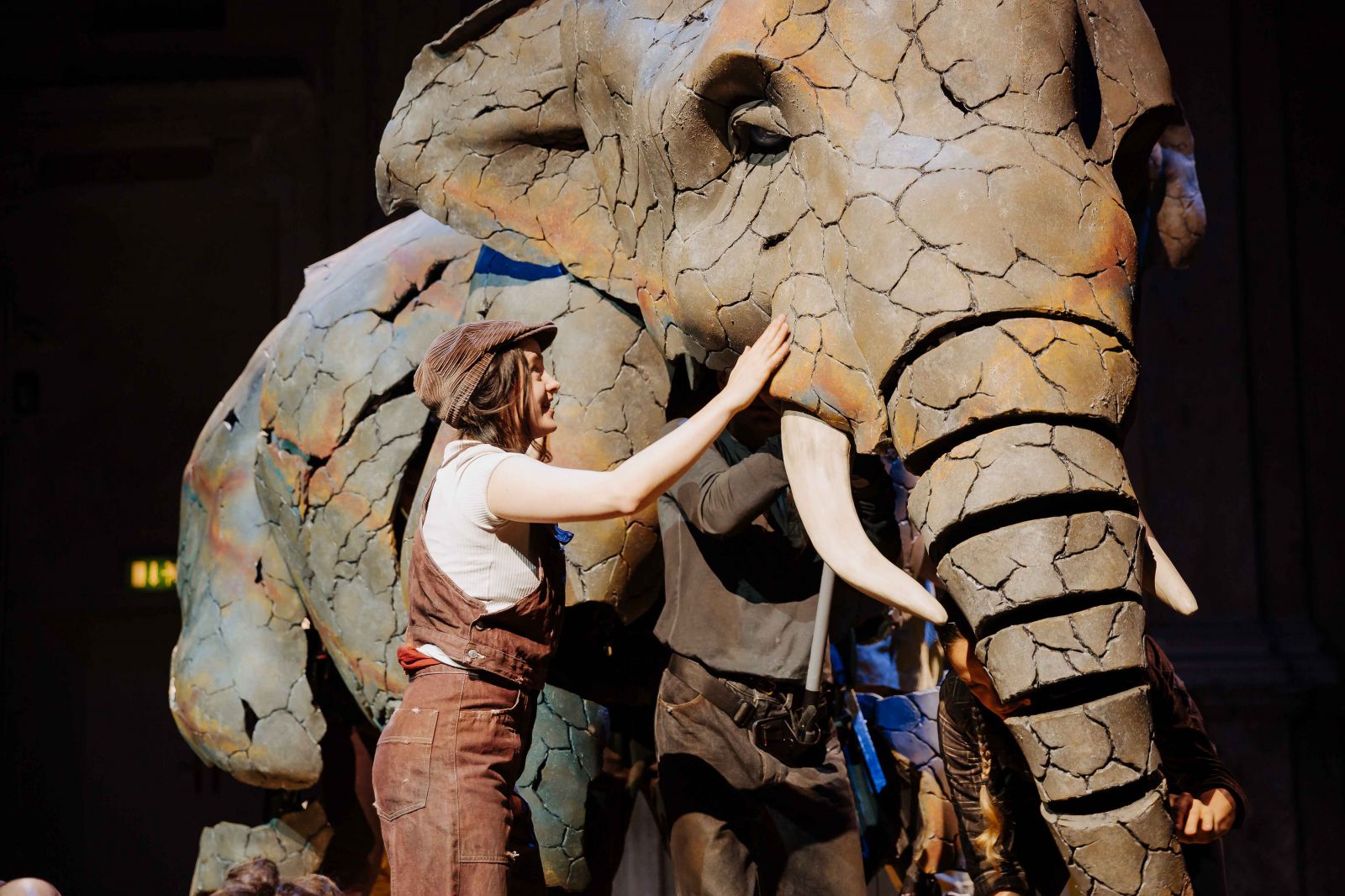 Not only a great pleasure for a child audience, but also for an adult audience… the giant elephant is almost a miracle on stage. No expense or effort has been spared, and what for Mervyn Millar conjures up on stage, he truly deserves to be called a "British puppet magician".. it's as if there aren't any puppeteers at all, and Khush actually exists alone, as himself, as an elephant, and even more, as a personality. The author of the book, Gillian Cross, was at the premiere and watched with obvious pleasure as director Ingo Berk, with the help of imaginative designer Damian Hitz, put the dramatisation on the Kasino stage in two wonderful, always exciting hours… .. the elephant Khush is a real experience, which should justly become the theatrical hit of the cityRenate Wagner, Merker

The novel The Great Elephant Chase by Gillian Cross tells the story of Cissie and Tad, two 19th century orphans in America who flee from blackmailing adults with a trained elephant… and there is only one main actor: the title hero himself, the grey giant. ..London puppet workshop Significant Object constructed the giant puppet elephant. He appears as a royal animal, consisting of life-size, coherent puzzle pieces, carried or guided by four puppeteers. His calm movements, corresponding to real limbs - from raising and lowering the shoulder blade to the careful elephant legs - are the most beautiful moments in Ingo Berk's production. Margarete Affenzeller, Der Standard

It's about an elephant, so one already suspects something big, but how is such a huge animal to be put on stage?.. it doesn't take long before this huge construction stamps out of a huge red box and amazes me. A mechanical-artistic masterpiece guided and moved inside by four puppeteers, who make every twitching, lowering, lifting and bunching seem like that of a living elephant and thus threaten to outdo the playing of the talented actors. The fragmented elephant skin of the puppet is like a premonition of the coming strains that the animal has to endure together with Tad and Cissie. Thus, the puppet becomes the embodiment of the whole play, which is even higher praise of those responsible. Isabella Haltrich, Neue Wiener