Some of the coverage of our puppets in reviews of Circus 1903: Back in 1903, you probably couldn’t have a circus without at least one stately pachyderm stepping on and off its little stool, its enormous ears nobly rippling under a fez. “Circus 1903” offers two — a mother and a baby named Queenie and Peanut — but both are life-sized puppets, designed by Mervyn Millar and Tracy Waller for Significant Object. Like Joey in War Horse, the elephants in “Circus 1903” make no effort to conceal their artifice. The stunning Queenie is a translucent gray exoskeleton with three humans visibly ensnared in her inner workings, strapped into harnesses, busily manipulating the levers that power each shambling step of her hinged legs. The smaller, friskier Peanut is a person in an elephant costume. Yet their gestures are so distinctively and beautifully elephantine that it’s impossible not to develop affection for them as creatures unto themselves.Margaret Gray, Los Angeles Times

When aerialist Elena Gatilova takes to the skies in a dramatic routine that depicts love loss and longing, it is particularly moving. As is the entrance of Queenie the giant sized life like elephant and Peanut her loveable calf. These puppets, so majestically designed by British company Significant Object are so incredibly stirring that they amaze both children and adults alike. They are controlled by a troupe of incredibly talented puppeteers. Chris Milford, Daniel Fanning, Nyron Levy, Luke Chadwick, Henry Maynard and Jessica Spalis manipulate the mammals with grace, strength and precision. The magnificent animals are the foundation upon which the entire show revolves.Tim Carney, BroadwayWorld Australia

Circus 1903 is quite clever in producing a fabulous show making great use of the space much smaller than your average Big Top. The elephants are gorgeous life-size puppets operated by the team of six puppeteers (Nyron Levy, Chris Milford, Daniel Fanning, Luke Chadwick-Jones, Henry Maynard and Jessica Spalis) each controlling a separate body part in fluid realism. The elephants aren't just props, they're characters with distinct personality. ..you won't find anything like Circus 1903. Showing us what dedication and love of craft can yield, we're transported back in time to what used to be every child's dream- a magical day at the circus that's sure to delight your kids and the child within you. Bekah Caden, Discover Hollywood Magazine

...And those elephants? They're simply stunning. Manipulating puppets designed by Mervyn Millar and Tracy Waller for Significant Object, six puppeteers bring a majestic mother and her scampering calf to life (look closely and you'll see some handlers propped up on stilts). It's the inventive and humane debut that elephants always deserved.Lindsey Wilson, CultureMap Dallas

One of the great promises of the show was the return of elephants to the circus, minus the elephant cruelty. This was achieved with some gorgeous puppets, in particular one rambunctious baby elephant who quite deliberately stole the show. … The movement of the animals was beautiful, evoking the Royal National Theatre’s puppet work in 'His Dark Materials'. John Lombard, Canberra Critics Circle

The riveting, high-skill circus acts are complemented with a thin layer of theatrical concept related to the show’s titular time stamp and the presence of two gorgeously delightful puppets. Two elephants, a mama and her baby, were designed by Mervyn Millar — a veteran of the Broadway hit “War Horse,” with its eponymous puppet — and Tracy Waller, of puppetry designers Significant Object. It takes a team of six to operate the two life-sized puppets, and the effect is transporting.Jeremy D Goodwin, Boston Globe

The stunning proscenium event is just what you'd expect from a Big Top, with the kind of acts you'd find during its golden age around the turn of the last century. The thrills that could have been lost on so many of us are still as captivating, if not more, than when they were first unleashed…. Life-size elephant puppets, Queenie and her baby Peanut, created by Significant Object, feel so incredibly real. They're crafted so you can almost feel them breathing. If you look into their eyes, you can see something behind them. What a dazzling way to keep these creatures in circus without having to train real animals.Chris Arneson, Broadway World

But, surprisingly, my favorite part of the whole proceedings are the “elephants.” They are actually amazing “puppets,” with people on stilts being parts of the big one. They’re actually what attracted me to this show in the first place! When I saw pictures of them somewhere a few months ago, I knew I had to witness it all in person. And they did not disappoint—they are charming and fascinating.Karen Salkin, It'sNotAboutMe.tv

The highlight of the first act is undoubtedly the puppet elephants. As the mother, Queenie, and baby Peanut lumber onto stage the audience is transfixed by these gentle beasts. The puppeteers have captured the motion of the elephant walk perfectly with the elephant tamers lending a hand to manoeuvre the trunk where it needs to be. The simple set up of hessian draped over a metallic frame effectively mimics the contours of an elephant’s hide and creates a sense of wonderment.Revelly Robinson, ArtsHub Australia 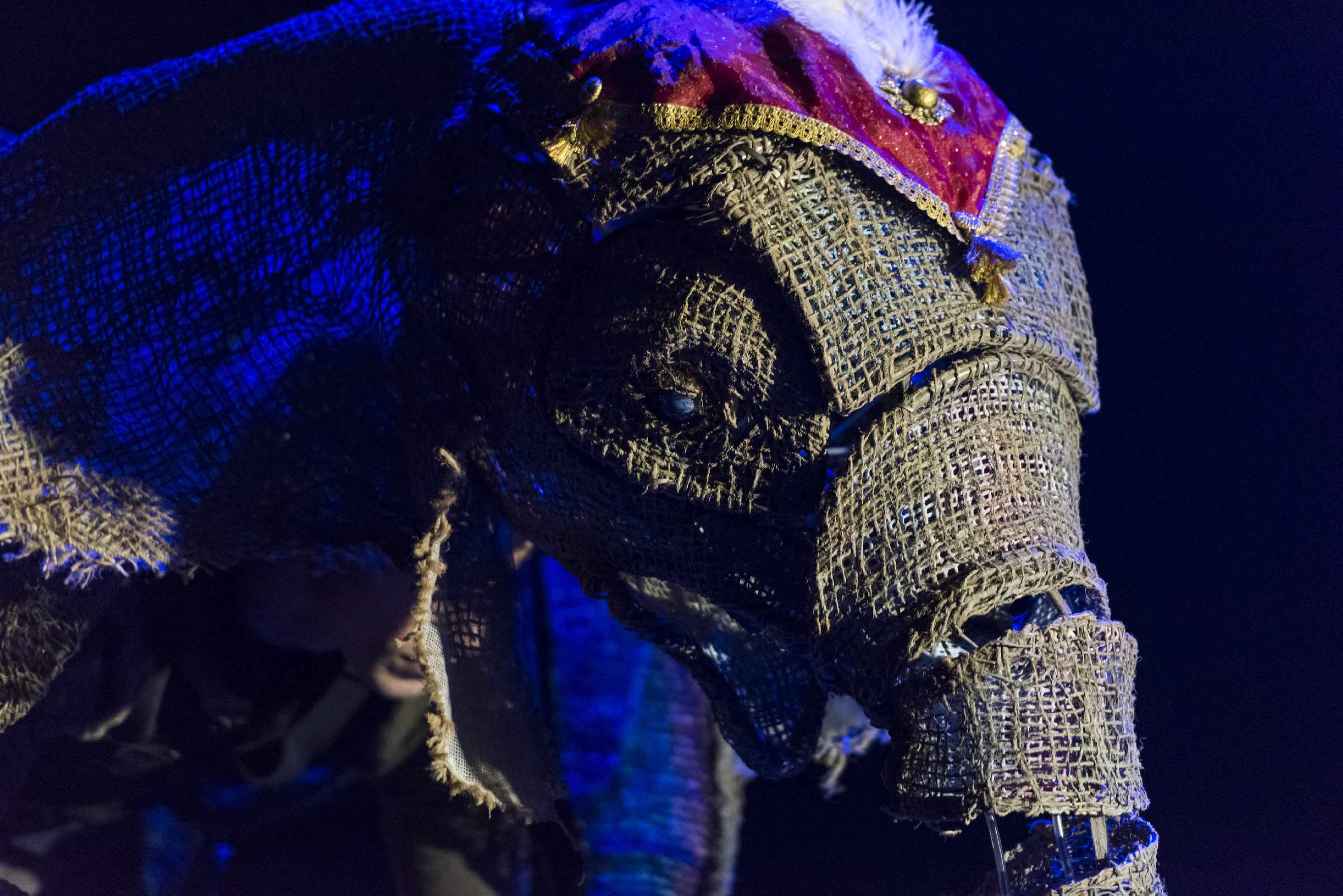 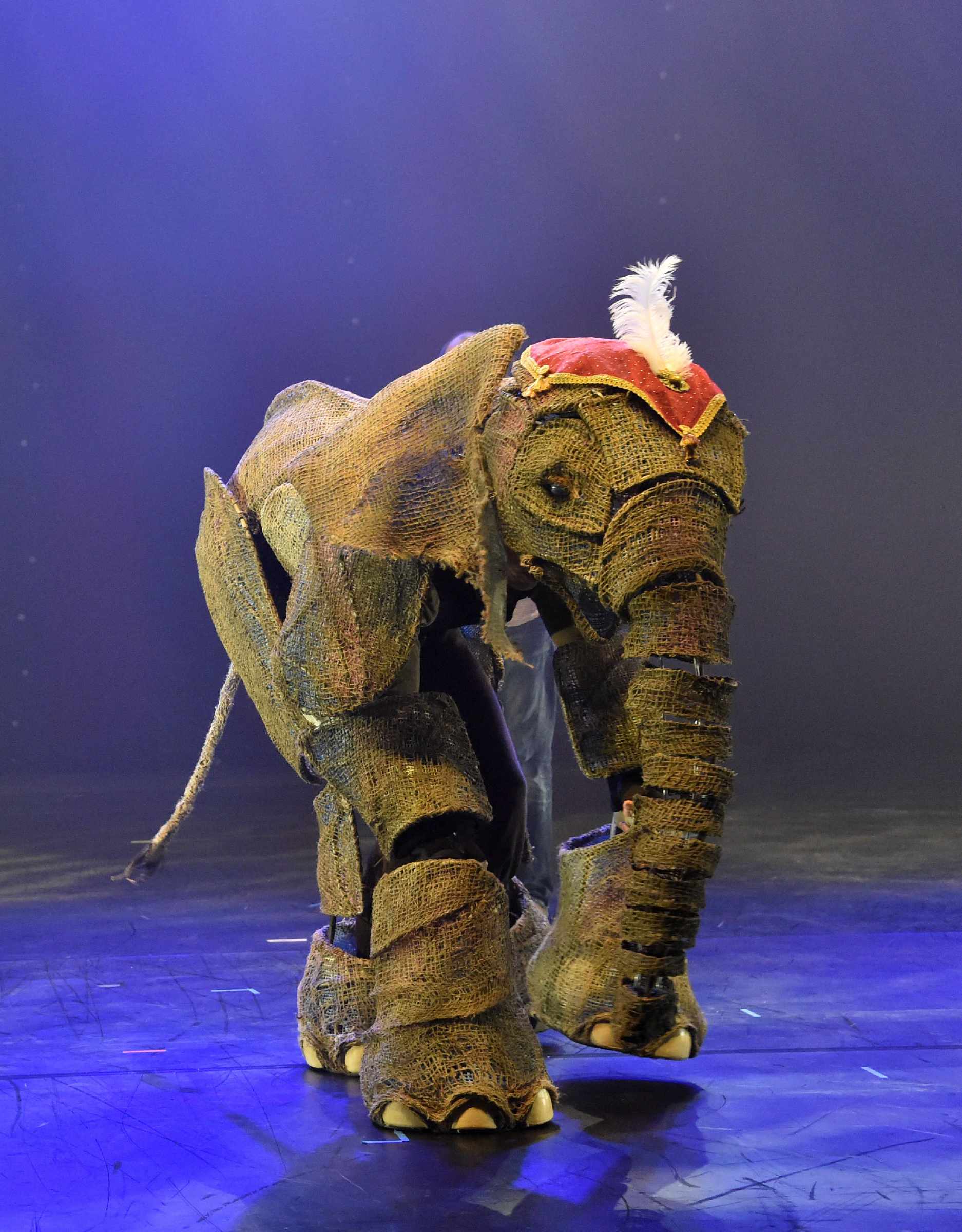